In my last post, You Lost Me at ‘Buy’, I was ranting about a scenario that really had me down-heartened about the direction of the game (and, in particular, mobile game) industry.  However, not being one to wallow, I already had a plan in motion (and development) to adapt to the changing landscape of the business I chose (back in the 80s) to be part of. 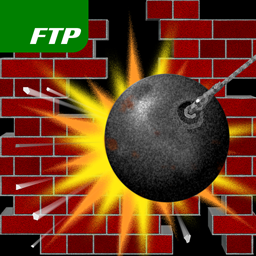 In the two months since that post, I have been working on Demolish! Pairs FTP, a free-to-play version of our latest iOS release.

In truth, the process was already underway when I made that blog post, but a comment from Joel Davis, along with an intense read of the book he recommended, Free-to-Play: Making Money from Games You Give Away, by Will Luton, caused me to revisit the (free-to-play) design from the top, with a different attitude and approach.

I ended up with a separate design document just for the free-to-play features that was longer than the design document for the game itself.  I did not change anything about the actual gameplay, deciding against banner advertisements that would adversely affect the experience, and determined not to allow “pay to win” in any sense.  However, I did incorporate several features into the product (interface) to allow for free-to-play, including certain (temporary) game restrictions and advertising, as well as means of playing for “free” forever (wherever time is a valueless commodity).

To be clear, I “embrace” free-to-play approximately the same way as I might embrace a great aunt who I have never met, and may never see again.  Of course, if it turns out that this great aunt happens to want to enhance my income substantially, then the least I could do would be to visit more often and get to know her, and my embrace may grow sincere.  It would be the polite thing to do. 🙂

In the world outside that metaphor, the new version is designed to allow, and encourage, players to give us money for the fun product we have created.  However, it does not force anybody to part with money and, actually, players may not be significantly restricted until they get decent at the game.  The other major drive and purpose of the free-to-play version is to get information about the market, relative to the paid version.  Although the first/paid version of Demolish! Pairs did make some money, that income stream deteriorated to the point that the possibility of cannibalizing sales with a “free” version is no longer a serious risk.  (A game needs to make a meaningful contribution to keeping our company in business, or it may as well be free anyway.)

So, I created this new free-to-play edition, Demolish! Pairs FTP, over the last couple of months (in addition to a whole new round of iOS solitaire game updates for Goodsol Development).  The actual development time for just the FTP (which does not stand for what you think it stands for) version was 80% of the time it took to build the original iOS (paid) version of the game from the prototype.  The game has been submitted to the App Store, so now we are just waiting for approval (I hope), after which we will see how the initial sales stack up against the initial sales of the paid version.

The free-to-play edition should have a much longer tail than the paid version, so when (<optimism>) this new version matches or exceeds the income of the paid version over the critical first 3 days, and then grows instead of plummeting, then my attitude will truly be changed (</optimism>).  I have a very specific target in mind for iOS to be considered a successful platform for us, and I am anxious to see whether we make that goal.

I plan to write more about the free-to-play features and results once there are actual results to consider.  In the meantime, you can buy (the original version of) Demolish! Pairs in the App Store, with no ads nor restrictive baggage.

Note: If we get at least 350 purchases of Demolish! Pairs 1.0 before the end of this month [October], Digital Gamecraft will donate $1000 to the Juvenile Diabetes Research Foundation, plus 50% of all net proceeds for sales beyond 350 (before November 1).