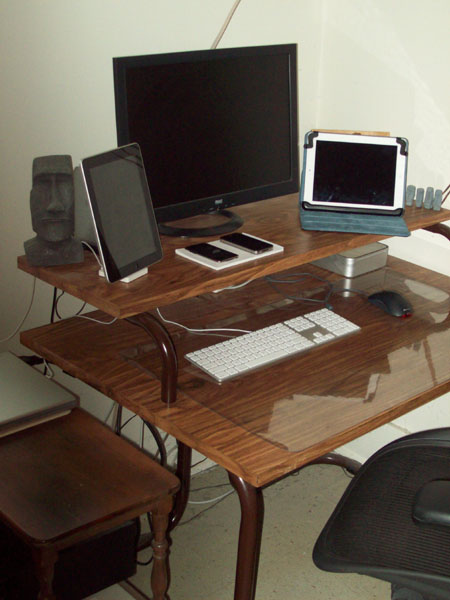 I thought I should give readers a little glimpse behind the curtain here at Digital Gamecraft, so here is a picture of my personal Apple technology desk on one of those unusual days during which a full complement of devices have gathered.  Usually, most of the mobile devices live in other places, but they occasionally come together for an ultra-local technology conference.  (In this case, they were all anxiously anticipating new provisioning profiles after the previous batch had expired.)
This desk in the corner of the office is used for the bulk of primary development and debugging for Mac OS X and iOS products. 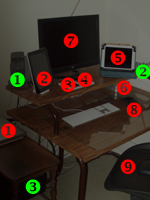 Here you see a simple key to the components of this image.  First, the parts labeled in red are the development components:

The components labeled in green in the key are fundamental to productivity, though not directly part of the development process:

That is a small look at one corner of my office, which serves as an important piece of our development effort.  With this range of equipment, we can develop and test products for the last 4 major versions of Mac OS X, on both Intel and PPC hardware, as well as on versions of iOS since the iPad was introduced, with at least one device with each technology.  (Of course, things change again on Friday with the availability of “The new iPad” and its large 2048×1536 Retina display.)

Note that the view just to the left of this picture is out a window into a small courtyard where birds and squirrels (black, brown, and red), as well as our cats, frolic during the day.  At night, you can hear the raccoons and opossums wandering through and, alas, smell the occasional skunk.

Perhaps, if you are all good girls and boys, I may later show you the desk at which I am currently writing this…

1 thought on “Where the Macgic Happens”