Now our second iOS title is available in the App Store. 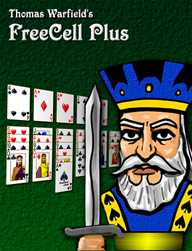 Yesterday, Apple approved Goodsol FreeCell Plus, our second Solitaire game for iPad, and it is now available in the App Store for only $1.99!

Goodsol FreeCell Plus is a collection of 12 different FreeCell variants, including FreeCell itself, as well as some other very popular games, such as Eight Off, Penguin, and Sea Towers, plus 8 more.  The title also includes 3 different card sets, 16 back designs, and features all of the quality gameplay you expect from us.  As a bonus, free of charge, you also get the cherished “Goodsol” branding because, oddly, Apple does not allow both iOS and Mac OS X games to have the same name, even from the same developer.

FreeCell Plus is just starting to climb the charts, and we anticipate a decent spike when the next Goodsol newsletter announces it.  Last week, A Little Solitaire climbed to #1 in Card Games, with a 5-star rating, and I expect that FreeCell Plus will perform similarly.

You will see on the Goodsol Solitaire for iPad page that “App 3” is being prepared for beta testing.  If you think you know what that title will be, you are probably correct. 🙂