This academic conference on games gets underway in earnest.

The first day of 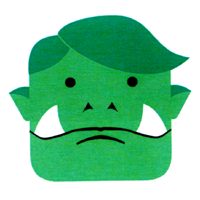 Meaningful Play 2014 started this morning with a keynote, continued with 3 conference sessions (6 choices each) followed by another keynote, and concluded with a special event where lots of games and research were presented in a social environment of happy, controlled chaos.

(There was actually “continental breakfast” available first thing, for those into waking up that early, but my schedule was not conducive to that.)

The proceedings were (briefly) opened by Johannes Bauer (Michigan State University), who chairs the Department of Media and Information at MSU, which department presented the conference.  (Interestingly, I have known Johannes for about 20 years in a completely non-game context.)  He introduced conference organizers, Brian Winn (Michigan State University), who I have known since before he started the first Meaningful Play, and Casey O’Donnell (Michigan State University).  Casey spoke about the monsters theme as a metaphor for games and game studies, saying, “Monsters aren’t bad, only complicated.”  Brian provided the selected hashtag, #MPlay and some (more grounded) conference numbers: 300 attendees from 17 countries and 23 US states.

The opening keynote was “Computer Game Studies: Moving Forward (?)“, presented by Mia Consalvo (Concordia University), who also had been one of the respondents last night.  She structured her entire talk as a “Dear Espen” (a play on Dear Esther) letter replying to a 2001 commentary by Espen Aarseth.  It helped set up the discussion on game studies, the primary focus of the conference, as well as subtly playing on the theme of diversity in games, which cannot help being an undertone of the discussion, given recent events.  The talk was interesting and engaging but, if I am honest, not terribly enlightening, especially given that I have been a part of the game industry through the entirety of the history she covered and that the talk was targeted at researchers; the only time developers were really addressed was when she entreated us to all work together (i.e., for game developers to listen to scholars).  My (retrospective) takeaway is that the area of “game studies” has to struggle for relevance within the larger industry.

For the first set of sessions, I attended a panel, “The Meaning of Casual: Serious Dialogues about Casual Games“, with presentations by Shira Chess (University of Georgia), Adrienne Shaw (Temple University), and Lauren Cruikshank (University of New Brunswick), with a remote from Maria Cipollone (UX researcher at Zynga).  The panel was (ostensibly) about taking casual games seriously, which I found really intriguing, but there was a large overlap in the genres discussed, completely excluding the types of casual games that my company builds.  Specific points made about nurturing games targeted at young girls do not translate to casual games in general, and where puzzle games or solitaire were mentioned, there seemed (to me) to be a bit of the same air of derision that the panelists were supposedly denouncing.  (I was astounded, too, that discussion of nurturing games never once mentioned the word, “tomagotchi”.)  The remote presentation was the most interesting, but the conclusion was one that we already know well, specifically, that “casual gamers” can be anything but casual about playing.

That panel provided a basis for some interesting observations, however.  The first two presenters (at least) have been called out by name in the #GamerGate controversy, which I suspect is the reason that the group seemed to be a little bit insular.  Whenever I saw one of them throughout the day, the others were always there.  (This is in contrast to my own conference behavior, where I often eschew friends in order to make new acquaintances by talking to other people.)  On that (parenthetical) note, one of my new conference friends went to the workshop, “Make the Course You Want to Take: MSU’s Surviving the Coming Zombie Apocalypse” and she (an educator) raved about how good that session was.

Then, there were two more sessions in the afternoon.  [OK, I admit it: I went home for a few hours, as I was not fully prepared to exhibit tomorrow, and I was also yawning due to “jet lag”, my normal schedule being closer to Pacific Time. 🙂 ]

The afternoon keynote was “Meaningful Leverage: Breaking the System of Ignorance“, presented by Erin Hoffman (Game Design Lead at GlassLab), who is probably best known as being “ea_spouse“, from the exposé on labor practices at Electronic Arts.  This keynote was quite enlightening, and well-presented.  Hoffman began by discussing the concept of systems as known to game developers, with references to game balancing, noting how easy it is (or can be) to “break” a system, which in the context of game design is a Bad Thing.  She then turned the topic on its head, looking at the larger world, making the case that ignorance itself is a system that feeds upon itself, and asking how we could work to break that system (improving education and fighting poverty being two obvious approaches), which would be a Good Thing.  This a fascinating concept, provoking thought and discussion, and seemed to be very well-received among attendees.

One point I found interesting, albeit mostly unrelated to the keynote itself, was when Hoffman dismissed casual games as “meaningless”.  I happened to be directly behind the table occupied by the presenters from the earlier panel on casual games, in a line of sight to the speaker, and it seemed that the whole table had a visceral reaction of discomfort at the statement.  The sentiment (or flinching) must have been somewhat broader, because the speaker immediately attempted to clarify her intent.  However, I do not think that she helped her case any by stating that did not mean they were unimportant, because they must provide something that is otherwise missing in the lives of casual game players.  Wisely, she quickly moved on before digging that hole any deeper; so shall I. 🙂

After a dinner break, there was the Special Event: Conference Reception, Game Exhibition, and Poster Session.  The main event was held in the ballroom, with the posters (and open bar) just outside.  Alas, some of the scheduled posters were not there (and few of the authors), but fortunately, Allen Trammell was there to discuss his most interesting one, Vertiginous Play: Debating “Fun” with the Diplomacy Wives Club, in which he looked into archives of the fan community of Diplomacy (a board game) from the 1960s and found parallels to current debates within the video game community.  After a healthy discussion there, I attempted to introduce myself to the aforementioned casual games micro-group to share my thoughts, was rudely rebuffed (an action rife with opportunities for speculation), and then bumped into Brian Winn, for the first time since his conference started, and had a (no doubt) much more fulfilling conversation with him.

Inside the ballroom, there was all manner of activity, with lots of games, both digital and “analog”, being discussed, demonstrated, and played.  There was bustle everywhere, and the event seemed to be really successful.  Some of the digital games that I saw were Fat Chicken, though Josh Mills was struggling with the seemingly inevitable technical issues when I visited, After the Storm, an interesting educational game for reading and writing in the context of journalism, and Guided Meditation, which was my first direct experience with the Oculus Rift headset (and my first VR headset experience in probably 10 years).  On the board and card game side, after meeting Clay Ewing, I made a point of checking out both Humans vs. Mosquitos and Vanity, the former (in particular) being impressive in its ability to convey a message in the context of an elegant card game that would be welcome at one of our regular game nights.

I also came across the game, The Bone Wars, a game about paleontology in a (narrow) historical context that taught me something with just the description.  What made this most interesting for me, though, was that I got involved in a discussion with the project advisor, Paul Gestwicki (Ball State University), in which we were able to discuss technical aspects of game development in depth.  We talked about tools, and game engines, and the difficulties inherent in creating general Solitaire deal solvers, and all manner of other topics of interest to programmers.  The conversation lasted until the event had technically ended and the ballroom was starting to empty.