Our arcade/puzzle game has been released!

Digital Gamecraft has published Demolish! Pairs on the App Store, where you can now buy it for only $1.99 (for a limited time only).

Demolish! Pairs represents a true milestone.  This is the first truly self-published title we have released in more than 23 years, and at the same time, it is the very last title on which we worked with our late friend and partner, Rick Tumanis, who did most of the artwork, and all of the sounds, for this game prior to his passing in 2011.

We are providing a limited number of free review copies to press (traditional or online) and, indeed, to the first three people who send an email to us at support@digitalgamecraft.com and tell us you read about Demolish! Pairs on this Gamecraft blog.  [Editor note: Press copies are still available, but the giveaway codes are gone.]

Our latest iPad Solitaire game is now available in the App Store. 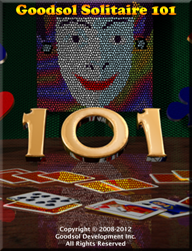 Goodsol Solitaire 101 was approved, last week, by Apple, so it is now available in the App Store for only $5.99!

Goodsol Solitaire 101 Touch Edition includes (not surprisingly) the same 101 Solitaire games as the Windows and Mac Editions.  Additionally, this version includes 34 bonus game variants, as well as all of your favorites from Most Popular Solitaire Touch Edition and A Little Solitaire.

So far, all of our reviews are 5 stars, including:

Aside from extra games, Goodsol Solitaire 101 Touch Edition adds new features not available in any other Goodsol product.  The deal selection has been adjusted to allow players to select any of more than 2.1 billion deals, which are compatible with Windows and Mac products, but a player can also select to replay a game, and the new result replaces the older one.  Additionally, a player can arbitrarily delete individual results, which is a capability often requested by customers.  Both of these two features can be expected to make appearances in Windows and Mac OS X products at some point.

Before that, though…  Pretty Good Solitaire Touch Edition is on its way!