This inexpensive console has some real merit.

Last week, as I was continuing to learn Android development, I was finally nudged into looking into the new OUYA console.  For those unfamiliar, the OUYA is an Android-based gaming console that sells for less than $100.  It got its start with a hugely successful Kickstarter campaign and, while it is not intended to compete with the PS4 and XBone launches, it is a legitimate player in the console market.

The reason that we considered the OUYA is that it is designed from the outset for open development, which makes it accessible not only for established indie developers like Digital Gamecraft, but also for anybody with an interest and just a little ability, and those who actually produce marketable games can find their titles listed right alongside AAA developers.  The unique thing about OUYA games is that all of them are free to try (so it is, in essence, a shareware console).

Acknowledging that it was a tiny investment, not to mention cheaper than most Android tablets or phones, we made our order on the spur of the moment, and 3 days later our OUYA arrived at the doorstep: 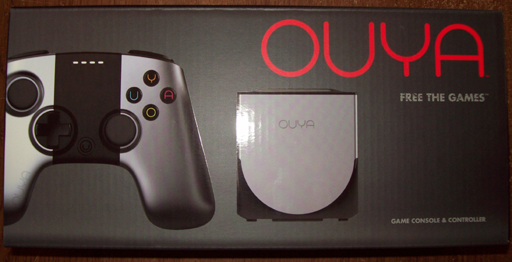 Of course, December is winter here in Michigan, which means that I had to wait a few hours for the electronics to come slowly up to room temperature.  During the wait, I contemplated how I had heard various complaints about the OUYA, but thus far, everything was very professional, exceeding my expectations.  Meanwhile, the contents of the box just sat on my auxiliary desk in anticipation: 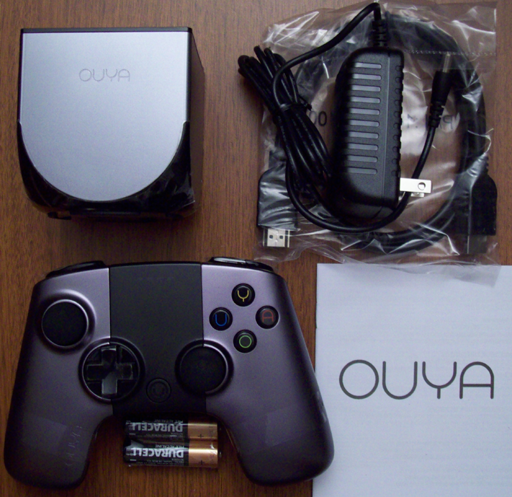 The first thing that surprised me was how small the console itself was; it literally fits in ones hand, and it is smaller than the controller in two of three dimensions.  I was also surprised, and delighted, to find that the box included an HDMI cable, a very nice touch that is usually overlooked (cynically: deliberately left out to make more retail profits).  Indeed, if one counted the retail prices of the controller, HDMI cable, and batteries, the console itself was quite inexpensive indeed. 🙂

Finally, the time came to set everything up, and I ran into my first issue.  Therefore, I will start with the (few) cons that I experienced.  The OUYA is a bit short on traditional documentation, so there is nothing explaining how to install the batteries in the console!  I challenged our local console expert, and he was unable to figure it out, either.  (A Google search reveals that we were hardly unique in our confusion.)  Also, after a bit of use, it becomes clear that the OUYA has no ventilation to speak of, so it becomes a rather effective hand warmer in a chilly office, but this will likely be a liability in summer.  Returning to the initial complaint, it turns out that the black area in the middle of the controller is a touch pad (!), which fact I did not discover on my own.

On the other hand, there were more important pros.  The installation process, including the downloading of a system update right away, was embarrassingly simple, especially when compared to the PS3, as well as humorous (even in the license agreement).  The display is extremely clear, even on my poor 720p office/development television.  The whole interface is straightforward and easy to understand, and the purchase process is just about as painless as it could possibly be.  The controller (contrary to some opinions) is solid and comfortable to use, and, of course, this whole system was inexpensive.

The available game software is certainly the most fundamental aspect of a console, and unsurprisingly, this is a bit of a mixed bag, at least in my limited experience (so far).  You have top games, such The Cave (currently #1), which delivers everything that one would expect, and others, like Amazing Frog? The Hopping Dead (#3), which seems to have come up a few weeks short of prime time.  I really wanted Pinball Arcade to be as good as their attention to detail, but alas, the delay between clicking a controller button and the flipper reaction makes the game totally unplayable.  Conversely, and promisingly, the OUYA version of Galaxoid, by lone developer Jacob Davis, is loads of fun (for just a few bucks).  This variety makes the ability to try games that much more valuable.

The next step is development.  Though I spent a little time playing with the OUYA as a consumer would, I have been too busy with paying work to install the ODK (OUYA Development Kit) and build anything for this new console.  You can be sure that I will post more about the OUYA after that happens.