Our package for FreeCell enthusiasts is updated.

As mentioned in my previous post, FreeCell Plus 4.02 was released at the end of last month, continuing the Goodsol Development autumn release party (which should continue into November). 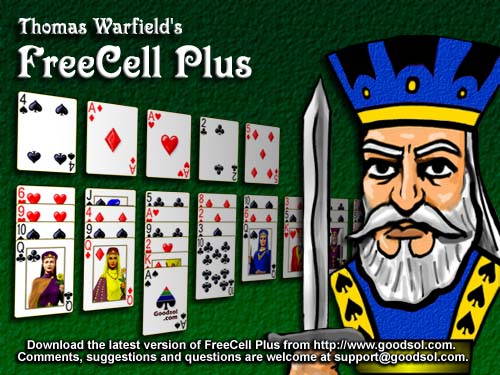 FreeCell Plus is a Solitaire game program available for both Windows and Mac OS X.  It includes the best version of FreeCell, one of the most popular types of computer Solitaire, along with 11 similar games (8 of which are playable in the trial version).  This free update fixes a few minor bugs on each platform and updates it to using the latest engine.  FreeCell Plus 4.02 is still available to purchase for the low, low price of only $9.95.

So, where have you been for the last three weeks?

Me?  Well, first of all, I have been recovering from a bad cold.  Perhaps it would not have been nearly so bad had I taken the time to actually get over it, but one disadvantage of working at home (and having a heavy release schedule) is the opportunity/pressure to keep working through illness.  Fortunately, the outcome has been positive.  (See below.)

Secondly, in a quirkily parallel situation, our server had some issues in presenting the blog.  Disappointingly, a system upgrade downgraded our copy of WordPress, effectively reversing all of the recent improvements, and caused some difficulty.  When I thought I had the problems fixed, it turns out that in my foggy state I missed one important file, so the blog was actually broken until this week.  (The fact that comment spam completely stopped should have a been a clue…)

Finally, and most importantly, I was working on a version of FreeCell Plus for a popular touch device developed by a company on Infinite Loop in Cupertino.  Internally, we have a playable version in the prototype phase, and we are now actively working on our recliner-based test methods.  Stay tuned to find out more in the near future.

A new version of our premier Solitaire for Mac OS X is released.

The autumn release schedule at Goodsol Development was kicked off with the release of Pretty Good Solitaire Mac Edition 2.12 on August 17th.

Pretty Good Solitaire Mac Edition is a Solitaire program that (currently) supports 200 different solitaire games.  PGSME 2.12 is a maintenance release that fixes a number of minor issues that have been reported by users.  You can download this free update here.  All registered users will be eligible for a free upgrade to PGSME 2.2, with 300 games, when it is released later this year, so Buy Now!

There is something for Windows users, too.

Of course, the flagship product is Pretty Good Solitaire (for Windows), so the same day also saw the release of Pretty Good Solitaire 12.4, which increases the total number of different Solitaire games to 750 (adding 10 new games).  You can purchase a copy here or download an upgrade/trial version here.  This release is the special 15th Anniversary Edition.

Unlike other Goodsol titles, these two versions of Pretty Good Solitaire are built from completely different code bases, in different languages, by different programmers.  I developed the Mac OS X version, and Thomas Warfield has been writing/improving the Windows version since 1995!  The dual release turned out to be almost double the usual work for a single “SKU” release (for Thomas, not me) so the upgrades are likely to be staggered going forward.

Even more is yet to come.

In the coming months, there are going to be releases every couple of weeks, with upgrades to all of the other major titles in Goodsol’s product lineup, including Most Popular Solitaire, Goodsol Solitaire 101, Pretty Good MahJongg, and even Action Solitaire.  Those who are paying attention will note that a “couple of weeks” have already passed, and true to this schedule, FreeCell Plus 4.02 was released two days ago.  I will write more about that next week.